Chocolate factory we were unaware that the year was going to be once more dominated by violence, another workers strike and the
emergence of the notorious Shankill butchers. Many of the IRA targets were now business men, the majority of whom were gunned down at their place of work.

A 15 month old baby boy was killed in a car bomb explosion at Harmin Park, Glengormley, near Belfast. The car bomb had been planted by the Irish Republican Army (IRA) and an inadequate warning given.

I was heavily pregnant and still trying to make our new home habitable. We hadn’t exactly been given a rousing welcome to our new community. One of our neighbours( who turned out to be the bane of my life, and of others), worked out that I was a catholic. She

told another neighbour that it was ‘ such a shame to see Catholics moving into the gardens’  She assumed we were both Catholic. Many years later I had to send her a solicitors letter as she started making wild accusations about us. But that’s a story for another day.

I rarely made a visit into the city. The worry of a bomb going off and the hassle of being searched and waiting in queues to get into shops was too much to contend with at this stage of my pregnancy.

We had eventually got the storage heaters working. While it was
great

to have heat it was impossible to set them and as a result they were either belting out heat on a mild day and not enough on a cold day. However it would be another couple of years before we could afford central heating.

Louise and her cousin were now attending play school three mornings a week. It gave me a chance to get some rest before the arrival of baby no 2. In those days there were no scans so it was a complete surprise as to whether we would produce a boy or girl.  It was difficult picking a name so on a Saturday evening a week before the birth while watching Starsky and Hutch we decided on Paul Micheal, if it was a boy.  Starskys real name. Charlotte if it was a girl. But with the amount of kicking I was convinced it would be a boy. When it came to the baptism we added on Samuel after Gordon’s dad. 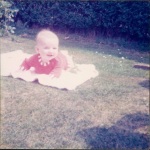 arrived. Husbands weren’t allowed in to the delivery room in those days so Gordon was phoned in the middle of ‘Match of the day ‘to say that his son had arrived.  I needed stitches and filled with gas and air I can remember to this day with some embarrassment, asking the doctor if he darned his own socks.

Ian Paisley, then leader of the Democratic Unionist Party (DUP), warned in a statement that if the British authorities failed to alter its policies then loyalists might have to consider taking over the administration of Northern Ireland.

This time the men at the shipyard didn’t back the strike nor did the workers at Ballylumford as Paisley couldn’t get widespread support.

Paul was baptised in St Bernadette’s.  We didn’t have a church to identify with at that time and we were not yet ready to advertise the fact that we were a mixed marriage.  Again we all came home to our new house to a cup of tea and the usual accompaniments. There were no glasses of wine or alcoholic drinks mostly cause we couldn’t have afforded them and drinking in the middle of the afternoon wasn’t the done thing.

Paul was a placid baby who continually smiled. Not sure whether this was because I didn’t fuss as much as I had done with no 1 but he still has that placid nature and smiles a lot. Okay,  so he’s 42 now!

In June of 1977 Anglia TV showed a documentary which was supposed to have aired on April Fools Day but for some reason it was delayed. It was narrated by ‘scientists ‘ who claimed that the Earth‘s surface would be unable to support life for much longer, due to pollution leading to catastrophic climate change. Physicist “Dr Carl Gerstein” (played by Richard Marner) claimed to have proposed in 1957 that there were three alternatives to this problem. The first alternative was the drastic reduction of the human population on Earth. The second alternative was the construction of vast

underground shelters to house government officials and a cross section of the population until the climate had stabilised, a solution reminiscent of the finale of Dr Strangelove. It claimed scientists had already a colony on the moon and were gradually moving there.  To say I was terrified was an understatement. How could they do this and not tell us? What was going to happen to us?  I think it was the next day when it was revealed it was a delayed April fools day hoax . I was so upset I hadn’t noticed the cast list at the end. It was called Alternative 3.

On the 16 August the king of rock and roll died. As a teenager I’d watched all his films. His first film ‘Love me Tender’  was the start of

many , following the same theme: boy finds girl, boy loses girl: boy serenades girl with romantic songs and wins girl back. Slushy but innocent and very appealing to adolescent girls. It wasn’t a huge  surprise to hear that he had died but such a loss. Great stage presence and wonderful voice.

Lenny Murphy was found guilty of possession of firearms and sentenced to 12 years in jail. [It was later revealed that Murphy was the leader of the ‘Shankill Butchers’ a Ulster Volunteer Force (UVF) gang which was responsible for the killings of at least 19 Catholic civilians.]

As in other years the IRA announced that there would be a ceasefire at Christmas. This would be broken on 13 January 1978