Christmas and New Year had passed quietly because of the ceasefire. It was such a great feeling to know that for a few days at least the New Year could be celebrated without fear of violence

We enjoyed Christmas in front of the television and enjoyed Some Mother’s do ‘ave em; The Generation Game with Brucie and the Mike Yarwood show.  It was a more innocent time and the programmes could be enjoyed by the whole family.

The Irish Republican Army’s (IRA) ceasefire came to an end. Merlyn Rees, then Secretary of State for Northern Ireland, said that he would not be influenced by arguments supported by the bomb and the bullet.

There was a series of bomb explosions in Belfast. The attacks were carried out by the Irish Republican Army (IRA).

Two members of the IRA were killed when a bomb they were transporting by car exploded in Victoria Street, Belfast.

I was gradually getting used to my life as a stay at home mum.  I have to be honest and admit that I found it quite tough. As an outgoing person who had thrived in the work place and enjoyed the camaraderie of coworkers it was tough.  Gordon was working in Belfast and doing night classes two nights a week so days were long.  He also worked overtime every Saturday to help us survive financially. I relished the company of my neighbours. We only had

one car and we lived about a two-mile walk to the village. I was definitely fit in those days. Every afternoon the baby was wrapped up and pushed in a large ‘Princess’ pram into Comber. As well as being fit I also had a face like a beetroot. The walk in was against the wind and as soon as I got into the heat again I beamed like a Belisha beacon.  Very attractive.

Being at that time a wishy-washy Catholic we still decided to have Louise baptised. More so that we could have a family do, than the religious aspect.  She was christened in the same robes as my mother had been baptised in.  No hotels after, just back to the house for sandwiches, mushroom patties and sausage rolls.   After that church going waned and I was a Catholic in name only. Since my treatment by the church re my wedding venue, I was very sceptical about the church and was also beginning to doubt my faith. After years of saying rosaries, attending mass and being made to go to confession, I was again questioning the hold the church had over us. I can never understand how people I know have respect for the Catholic Church. I had seen enough bowing and scraping to priests. I refuse to be one of them.

Around February I was introduced to a girl who lived in the next street. She too was breastfeeding and was a member of La Leche league.  We became friendly and to cut a long story short we ended up on Radio Ulster on the Gloria Hunniford show doing a

phone-in on the subject. A great experience. I just wish we had mobile phones in those days so that we could have recorded it. It was such a pleasure to meet Gloria before she left N.I. and became a big star. As a result of the show, we did the rounds of Ante- natal clinics encouraging other young mums to have a go. It was a great success.

In June, the local Presbyterian church advertised a beautiful baby competition.  We couldn’t resist it. We entered Louise and she won. A £5 voucher for the local chemist was the prize. We moved rather quickly when we saw the minister coming to congratulate us and to no doubt check out what services we attended.  Felt a bit guilty. No I’m lying we didn’t. I think the cute little mop cap helped.

In July we headed to Bunbeg for a week’s holiday. We stayed at the Ostan Gweedore in Bunbeg.  Not the most glamourous of buildings but the view and the food compensated.  It was one of George Best’s favourite hang outs though I have to say I never saw him there

on my many visits. The Boyle family ran it as a family hotel and the beach with its wrecked boat became an iconic place to have a photo taken. My family was there, so we had some built in baby sitters – a luxury for us. Louise was in a baby walker and had a great time pushing herself along the corridors. She preferred that to walking. The views from the hotel were wonderful and as we strolled up the road to the village we were met by the smell of burning turf fires.

One night after settling Louise we went down to the bar to find John Hume and his wife along with Paddy Devlin and Phil Coulter.  A sing-song ensued and I will always remember John Hume singing The Town I Loved So Well with Phil Coulter playing the piano. A memorable night. Again, a pity there were no mobile phones. It’s so sad to see that the hotel is lying derelict waiting for a buyer to restore it.

The Ulster Volunteer Force (UVF) carried out a gun and bomb attack on the members of the Miami Showband. Three members of the band were killed and one seriously injured during the attack.

The holiday turned out to be more expensive than we thought and on return we received a letter from the bank saying we were overdrawn and the bank manager would like to see us.  Yikes!  We got a warning about being overdrawn and the need to be more careful.  So I took on a part-time job with the local newsagent, Miskellys. Every Sunday morning for 3 hours I sold the Sunday papers and got £3.00. I actually enjoyed it and felt more like a part of the community. People would now recognise me on the street and stop for a chat.  The wage from this together with my ‘dole ‘ money helped to keep us solvent.

Three British soldiers were shot dead in a gun attack on a British Army observation post near Crossmaglen, County Armagh.

Around November I got a letter to say that I had an interview to return to my job in the Civil Service. I had to go and hoped I wouldn’t be offered it but I couldn’t resist putting my best foot forward and as a result I got a letter offering me the job. I had to decide to either turn down the job or make child care arrangements and return to work. I couldn’t envisage leaving our daughter with someone I didn’t know and so I turned down the job and said goodbye to my £6.00 a week.  A few extra shifts at the newsagent helped us get through Christmas.

Christmas 1975 and Laurel and Hardy were No 2 in the Christmas charts! We were entertained on Christmas night by Christmas Day with the Stars starring Cilla Black. We headed to Warrenpoint to have Christmas dinner with the in -laws. We hoped for a quiet New Year but it was not to be.

Three Protestant civilians were killed in a bomb attack, carried out the People’s Republican Army (PRA), a covername used by the Irish National Liberation Army (INLA), on the Central Bar, Gilford

Another horrific deed to end the year! 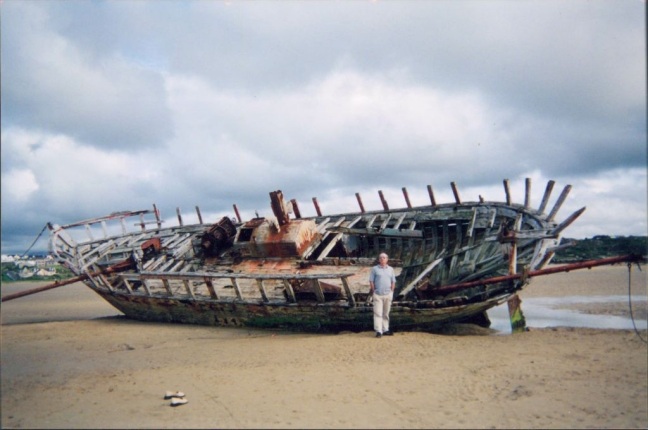