I was happy to see the end of 1973. Personally and politically it had been a bad year. I had lost my baby and the killing had continued for another year.

Sometime in February I started feeling sick in the mornings. I didn’t dare think what might be causing it. But memories of coming home from a Christmas party a little tipsy and …

well let’s say I was hopeful. Eventually I picked up the courage and went for a pregnancy test. No instant results in those days but we were past the stage of the dead rabbit ( if you are curious, look it up.) I think it took a week to confirm that I was indeed pregnant.

Bitter sweet in that the due date turned out to be within a day to the year of my lost pregnancy.

Was I sick?  Extremely. I hated the mornings and certain smells resulted in a bolt for the nearest loo.  I still find marmalade  hard to stomach. My father -in -law, a man of few words hoped that I ‘could hold on to this one’ and as was the time it wasn’t talked about much in my family. Not sure whether this was a catholic thing or just the way things were in the seventies. I had as a child been vaguely aware of my mother having at least one miscarriage and I also had a brother called Pius who only lived a couple of hours. We were obviously nervous during the early months because of what had happened but as the bump got bigger and I passed the four-month marker we began to relax.

My sister -in -law was also pregnant and her baby was due around the same time as ours. Being the oldest in the family I had hoped to produce the first grandchild but as it turned out it was not to be. She beat me to it by five days.
The news in NI was depressing.  Hardly a day went past without killings and bombings. We toyed with the idea of leaving but we were reluctant because of family ties even though they did live quite a distance from us. It’s impossible to list the number of casualties but it was sickening, no side escaping from the carnage.
Tuesday  14 May 1974

The Ulster workers council strike began. It was to last 14 days and to cause misery for the general population.

Probably the most annoying part of the strike was the electricity being on a four hour cycle. An employee of NIE became an instant personality and a harbinger of doom. He earned the nickname Hugo ‘ on the brink ‘ Patterson. He would be interviewed on Radio Ulster every evening to let us know how much power was left and the areas that would be subject to power cuts. We were always ‘on the brink. ’ Arriving home from a day’s work with no power so no electricity to cook dinner was infuriating and that was if you

could even get to work. Roads were blocked and there were barricades everywhere. Busses were either diverted or not running or in some cases burned to a shell. As milk wasn’t being collected from farmers, milk was dumped and fresh food was hard to come by. I can’t list all the problems the strike caused but there were many.

33 civilians and an unborn child were killed when four bombs were planted by Loyalist paramilitaries in Dublin and Monaghan.

Brian Faulkner resigns and the Executive collapses. The strike ends and the chance to become an integrated society ended with it.

My pregnancy was progressing satisfactorily. I remember standing in the living room watching Gordon cutting the grass when I felt that first little flutter. Some refer to it as quickening. I knew everything was ok. I had decided to leave work and look after the baby. There were no relatives living within 40 miles and we couldn’t afford day care. I got a small amount of a maternity grant but only I think for six weeks. I was quite sad to leave work but couldn’t wait to become a mum so it was a bitter-sweet occasion on the day I left.

As the date got nearer on a routine hospital visit my gynaecologist discovered that my baby was breech. It was decided that it would have to be turned. In those days there was no such thing as a scan so I had to be x-rayed to see exactly what way the baby was lying. Picture a pregnant me balancing on my stomach while the X-ray was taken. It was then decided to turn the baby. I was given a mild sedative while they pressed and prodded until she did a 180 degree turn. I awoke bruised and sore but relieved that a breech birth was no longer on the cards.

On 15 September after a long hot summer our beautiful daughter made her appearance. After being 37 hours in labour ( I was induced on the 14 th morning) and with the help of forceps she was finally delivered. The previous evening while dosed up on ‘ass and gair’. ( gas and air I listened to the last night of the Proms on a nearby television interspersed with my mother ringing practically every two hours to see what the hold up was. Gordon had gone home to watch Match of the Day and wait for a phone call to say he was now a dad.

She still is by the way.  In those days there was no posing on the steps of the Ulster Hospital seven hours after the birth. Instead I 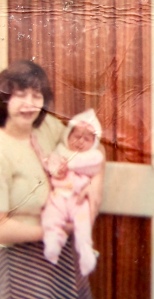 spent a week in hospital where most of my time was spent sitting on a rubber ring. Ok, I know, too much information.

When we eventually got Louise home, I realised that just because I had helped to look after my brothers and sister, I was ill-equipped to take on the responsibility of a baby.  I’m not sure the hubby had even held one before. There was no support from family as they all lived far away. I pity the local Doctor, Dr. Mitchell.  I had him on speed dial and every time the child cried for more than 15 minutes I was on the phone demanding a house visit. She was a collicy baby who slept little, (funny how that changed at about 11 years old)  and many nights as a last resort we put her in the back of the car in her carry cot and drove her around till she dropped off to sleep.  Maybe that’s where her love of cars comes from.

However we soon got the hang of it. I was breastfeeding so Gordon got off lightly.  Few sleepless nights for the first  few weeks and then lo and behold at two months two teeth started to peep through the gums. Sleep was something we remembered from the distant past. She had been born with teeth already formed. It was overwhelming but we coped, just about.

Since leaving work and having the baby I had discovered my neighbours. All uneven houses from no 1  ( we were no 13) had either babies or toddlers. A routine developed. 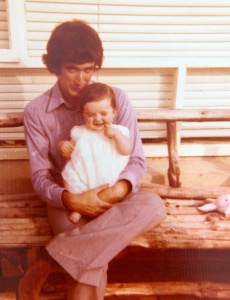 Get up in the morning and go to the nappy pail where cloth nappies were soaking in Napisan overnight. Get out and fill twin tub washing machine, a chore at the best of times, but a nightmare if the tube slipped out of the tub when filling it and a flooded kitchen ensued. I began to realise there was a competition going on

and no matter how early I got the nappies on the line, someone would always beat me to it.  On a couple of mornings a week we all met up for coffee around eleven. Added pressure if it was your turn to have the house looking spic and span.

The year ended with Merlyn Rees the then Secretary of State for Norther Ireland promising that the Government would respond positively ‘if there was a genuine and sustained cessation of violence’  This resulted in a short ceasefire by the IRA followed by a return to violence. 1975 was going to be no different