Margaret Gibson Simpson was born in the station house at Broighter

near Limavady in 1886. She was one of 12 children and her father was the Station Master. Agnes his wife was the Post Mistress. The station house was not suitable for 12 children. It was riddled with damp and one by one the children succumbed to TB until only two were left,  Margaret and her sister Hilda. They were beautiful children and the apple of their daddy’s eye. William was in his late forties when the two little girls were born and having buried the other ten he cherished and protected them as best he could. Every day,  the train passed by their house rattling the windows and shaking the house. When they were young they would cry and William would comfort them but as they grew  older they loved to hear the train coming and would rush out to see the passengers as they disembarked. A donkey and cart would be waiting to take them to their destination.
Both girls were pretty with long fair hair. They had attended the local
school where they learned to read and to write and they attended
church every Sunday. They learned to sew and to cook and were able
to help in the home where Agnes,their mother, was now frail and needed help. When Margaret was sixteen it was decided that she would go to the ‘big house’ close by, as a servant to the local Landowner and Hilda would stay and look after the home. For many years she served below stairs but when the children came along she began to take care of them and with her household skills and her way with the children, Margaret soon became a favourite within the household and before long became a nanny to the children in the house. She was highly respected by the family and so many years later when they decided to move to England she was asked to go with them.

Breaking the news to her parents was difficult. This didn’t happen in
Limavady in 1914. The usual plan for a girl was to find herself a husband, settle down and have children. As Margaret was almost thirty and had not found a suitable husband her father thought this might be a sensible move.  He was distraught at her going but he knew that this was a great opportunity for her and he had the assurance of the family that they would look after her like one of their own. Her mother and father had conflicting views. Agnes knew that she wasn’t going to live much longer and the chances of seeing her daughter again were slim but William persuaded her that it was the right thing to do. With a heavy heart she agreed.

And so, on 28 June 1914, Margaret along with her new employers
boarded the train at Broighter and headed to Belfast where a boat was waiting to take them across the Irish Sea to Liverpool. Arriving at the docks she had her first glimpse of the ship that would bring her to a new and exciting world. The Graphic was the name of the ship, built by Harland and Wolff. Little did she know that the very same ship would have an encounter with a U-boat during the First World War. It did escape, however, and Margaret travelled home on it on a number of occasions over the coming years. As they drove through the streets of Liverpool in their taxi cabin she noticed a newspaper stand which declared that Archduke Ferdinand and his wife had been assassinated. She felt uneasy but was unaware of the significance of the event. She heard her employers talking quietly and noticed that they look concerned. She realised that things were serious and she began to wonder if she had made the right decision. After an overnight stay in the newly erected Adelphi hotel they all boarded a train, which would take them to London and eventually to the leafy suburbs of Surrey and to a beautiful house called Tudor Lodge.

Her employer was the son of an hereditary peer. He had taken ill and
was not expected to live and so his son had been summoned back to
take over the running of their estate. There was mounting speculation that war was imminent and fears that her employer would have to fight for his country. It was becoming clear to Margaret that things were moving along fast and on a number of occasions she heard war mentioned. She wondered if her parents back in Ireland had also heard the news and were worrying about her.

Tudor Lodge was beautiful. For the first time she had a room with an adjoining sitting room and she spent her days looking after the children that she had grown to love. Her employer’s younger brother,  Nigel, a Naval Officer, was a frequent visitor to the house. It was fair to say that from the moment she set eyes on him she was smitten. At first he acknowledged her politely and there was little conversation. However, not long after their arrival her employer’s father died and as she wandered around the house helping to make arrangements for the funeral she came across the Naval Officer in the drawing-room. She offered her sympathy and before long they were chatting. She told him about life in Ireland and he spoke about his naval career. Over the following days they frequently bumped into each other and it was obvious that he was smitten too. Margaret was worried about the fact that although she was a valued employee, she was just that, and she felt that the romance would be frowned on by her employers. She broached the subject with Nigel but he reassured her that was not the case. They started having walks around the large gardens of the estate and he told her of his fears should war break out.

On July 25 Austria – Hungary severed all diplomatic ties with Serbia and began to mobilise troops. A family gathering was organised at Tudor Lodge that evening and Margaret was surprised to be included. She knew now that she was accepted by the family and that her romance had been validated.  Nigel arrived looking very handsome in his uniform. He called her to one side and handed her a present. It was a silver dressing table set on which he had her initials MGS-Margaret Gibson Simpson inscribed. Overwhelmed and somewhat surprised, she wondered how he knew her middle name. He explained that it was on her trunk which he had seen sitting in the hall on the day she arrived. Talk turned to the prospect of war. It was now 31 July and reacting to Austria attacking Serbia, Russia had begun mobilising her troops. It wasn’t looking good and the chances were that war would soon be declared on Germany as they were now in combat with Russia, France and Belgium. Margaret knew nothing of world affairs and all the talk of different countries at war was hard to understand. She hoped that they would sort it out and things would go back to how they were. A letter had arrived from home saying how worried they were and pleading with her to return home. Margaret knew however that her future lay in England and that she and Nigel had plans to marry.

It was now August and the Austrian – Hungarian empire had declared
war on Russia. There was a sense of dread hanging over Tudor Lodge.
Baronet McLintock as he had become on the death of his father was
spending more time in London and when he returned at weekends he looked worried and agitated. This was affecting the mood in the house and everyone sensed that something awful was going to happen.

A sombre looking young Naval Officer called to see Margaret on 12 August 1914. The conflict now involved Great Britain and war was declared. Nigel McLintock  informed Margaret that he was joining the Grand Fleet, which was at that time based in the North Sea. It was there to combat the Germans. Margaret was devastated. She pleaded with him not to go but he assured her that the war would last only a few weeks and he would soon be home. He also said that he had written to her father to ask for his approval for their marriage.  They began to make plans for a wedding on his return. As he left to return to London he gave her a beautiful silver jewellery box again inscribed with her initials. She embraced him and said goodbye.

That was the last time Margaret saw Nigel. In the early hours of 22 September 1914, the cruiser H.M Cressy was torpedoed and sunk. A total of 149 were drowned including Nigel McLintock .

Margaret Simpson never married. She remained with the McLintock
family for many years and died a spinster in 1954. She traveled the
world with the family but never met anyone to compare to her first love. She was buried in Wandsworth cemetery in London and Thompson McLintock one of her charges was a witness on her death certificate. The war had ruined her chance of having a happy life but she never regretted  meeting Nigel.  She was grateful for the short time they had together. The trunk now sits in the home of her great-niece in Normandy and the jewellery box and dressing table set are in the home of her great -nephew in Belfast. 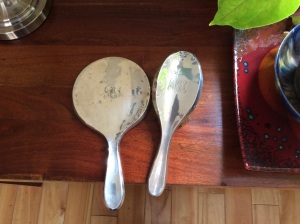 Based on a true story.  Dramatic licence!