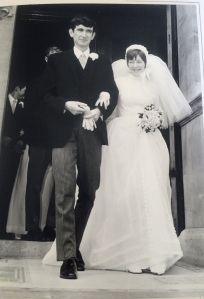 On the 18 August 1970 the day before the wedding, I had recovered sufficiently from my attack of jaundice to go ahead and get married.  I thought I was ok about the ceremony being in Belfast, but on that morning contemplating the fact that I couldn’t leave to get married from my childhood home I was overcome with grief. Sitting at the breakfast table bawling my eyes out my mother thought I was having second thoughts about the wedding. I think it was a build up, of all that had happened coming up to the big day. I reassured her that all was ok, it was just an attack of nerves. I had to head for Belfast in the early afternoon and I had also to make sure that I had everything I needed with me. I couldn’t just hop back to Rostrevor. We had a ‘viewing the presents night’ the previous night and due to the generosity of my guests I had enough tea sets, toasters and Pyrex casseroles to open my own store. Well before the days of Ikea.  I also had some beautiful pieces of Waterford Crystal all of which remain intact to this day.

There was no hen-do. They weren’t the done thing in those days but there was a stag night. It had taken place in the Rose and Crown on the Ormeau Road a few nights earlier. Thankfully I wasn’t there to witness the aftermath which I believe was quite ‘lively.’ The groom and his best man JT slept over in a friends flat and I believe had breakfast in the nearby Wellington Park Hotel. No nerves there.
The morning of the wedding, Wednesday 19 August was warm and sunny. There was only myself and my two bridesmaids in the flat. Unlike today’s brides, there was no hairdresser, no make up artist and no spray tan. I applied my own makeup and you would have hardly noticed that the whites of my eyes were still slightly yellow. 😀  The flowers arrived on time. The cars were at the front door. All I needed was my dad. He arrived in the nick of time with my little sister. An army checkpoint had delayed him. I came downstairs to the front door. The little old lady from the flat downstairs was the only one there to see me on my way. I know if we had been at home the villagers would have been out to see the bride departing. 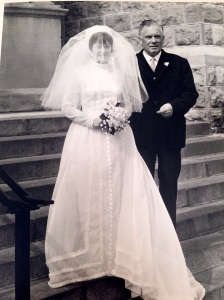 The city had been quiet for a few weeks. Rubber bullets had been fired for the first time at the beginning of August. The British Home Secretary had threatened to impose direct rule if agreed reform measures were not carried out. Sound familiar? Not much has changed in 48 years. Hard to believe.
As we made our way up the Crumlin Road to the Holy Cross Church at Ardoyne we were escorted by two army Saracens out on patrol. In my wildest imagination I hadn’t anticipated having an escort to the church, especially from the army.  When I stepped out of the car, Gordon’s Uncle Billy was waiting with his cine camera. Billy and his wife Chrissie were the only two of the Scottish contingent to brave the situation and travel to Belfast. Not sure whether it was the fact that Gordon had succumbed to the charms of a Catholic that put them off or the situation in Belfast but the Allan side was under- represented. However thanks to Billy the wedding was recorded for posterity and I’m going to let you have a look.

As I tried to say my wedding vows I teared up and it was obvious to the congregation I was very emotional. After all we had been through we were finally here. My little sister who was kneeling behind burst into tears and had to be consoled by one of the officiating priests. I learned afterwards that my wedding caused controversy within the clergy in Ardoyne. Why? Because Fr. Marcellus gave communion, both bread and wine, to Gordon. It was unknown in those days for a Protestant to receive communion and some were not happy about it. I think it confused the congregation even more. Some must have been wondering what foot he actually kicked with. God knows what Granny Fallis, a card-carrying Baptist must have made of it but the old girl said nout and appeared to enjoy the day. 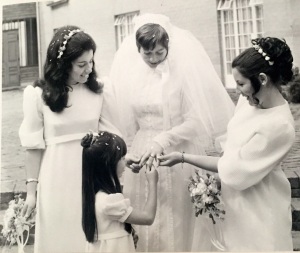 The reception was lovely. Everyone enjoyed their meal of dover sole, lamb and raspberries in Curaçao. Not together of course. Everyone but me, that is. I still couldn’t eat and had to be content with an omelette. There was no after party. To entertain the guests my lovely cousin Siubhán played the harp beautifully. No disco, no dancing and no late night.

Gordon had been treated to drinks all afternoon and by 6 pm he was ‘rightly’  I decided it was time to leave. My going away outfit was made by my mother in law. A dress with a jacket. She was a wonderful dressmaker. As I was leaving one of my aunts came over to say goodbye. ‘ We’ll be praying for you’ she said. I pictured the guests falling on their knees and offering a decade of the rosary after we left.

We were leaving on the midnight flight to London that evening.  Yes there was one from Aldergrove in those days. It cost £5 for a return ticket.  We waited in my aunt’s house on the Glen Road where Gordon got something to help sober him up. I didn’t mind flying then but I was a bit nervous and wondered if it was an omen when lightning hit the plane on the way over. We arrived in London after two in the morning. By the time we got to our hotel on the Cromwell road it was nearly three. To say the hotel was underwhelming would be an understatement. There was no lift and our room was on the third floor. No en-suite and the room was basic to say the least. But the next morning we discovered that there was a coloured TV in the lounge and we’d never seen one before.  We were very impressed and wondered if we would ever have one ourselves. We spent a few days sight-seeing and went to see Paint your Wagon in the cinema at Leicester Square.

On day three we headed for the train at Victoria Station. We were going to Calais on the hovercraft from Dover and then by coach to Ostend. That was a strange experience. We were flying along on the top of the waves but couldn’t see out. We were strapped into our seats and weren’t allowed to move for the 30 mins. With a lot of others, we piled on to a coach that would take us to Ostend. The driver called out the names of the passengers to make sure we were all there. As I had booked in my maiden name that was the one he read out. It was 1970 and the looks we got were hilarious. We both looked very young which added to the interest of our fellow passengers.

Ostend was probably an unusual choice for a honeymoon but it was picturesque and I loved it. We traveled into Holland for a day and the weather was lovely. We also visited a beer festival which featured the ‘dancing waters’ Don’t ask! The trip to Ostend cost £15 each and that included transport and hotel !

The honeymoon was soon over and we headed home. Northern Ireland was shrouded in autumn mists when we arrived home.  That was 48 years ago, I’m not sure it has totally emerged from them yet. 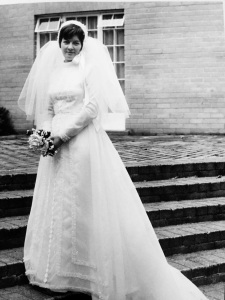 4 thoughts on “Ann Allan: Memories No. 17 The Wedding”