Now that we are a few days into 2015 and all the Christmas decos are down I thought I’d have a look back at 2014. This was the year when I discovered I had one leg shorter than the other, one foot shorter than the other and as a result am now listing to one side. I don’t have to list but I feel I need to compensate. I constantly bump into people in the street as I look in shop windows checking how upright I actually am. My only problem is standing on a slope.

Those of you who have followed previous blogs will know that I am in the process of having implants. No, not breast implants, teeth; I’m getting new teeth. It has been a long process since that first consultation when I heard the bad news that to have the new teeth I had to have all the bottom teeth extracted. You can read what led up to this in my previous blog…………. But on a cold day in November I had the job done. Two had previously been removed. The seven remaining all came out in one go. No knocking out for me. I was a brave little soldier and had them out under local anaesthetic. There were enough injections to ensure I stayed frozen for at least five hours but at least there was no pain. As soon as they were out the dentist shoved a temporary plate in on top of the raw gums assuring me I would get used to them. I have to admit they looked well but felt awful. As a result they are more often out than in and I look more like my granny every day. She’s been dead for 50 years so it’s not a pretty picture. I had great difficulty eating over Christmas so one benefit is that I didn’t put on too much extra weight. Roll on 19 January for next stage of procedure.

Update: Had procedure on 19th January. Got base for implants inserted. Had a mouthful of stitches for two weeks. Hoping to finally get teeth in May. I now speak with a lisp and have the most awful diet as I couldn’t manage the temporary teeth. Roll on May or I’ll be the size of a house.

2014 saw the setting up of the Opengovnetworkni. Got involved by chance but it felt good to be part of it. Too much is hidden from the public re decisions taken by our elected representatives. We, as members of civil society need to be much more involved in decisions and our aim is to try and change things with much more openness and accountability. I have made many new friends through the open network and feel I have, in my own way, contributed to it. Still time to get involved at @opengovni

We had elections in 2014. I enthusiastically campaigned on the doorsteps for NI21. No need to go into what happened now. I’ll save that for a later date as there is much more to come out as to what actually happened. Watch this space!!

I became a blogger in 2014 for Vixens. I try to be honest and forthright in what I write. Thank you to those who follow and comment. I’ve already told you how my life was devoted to my family for a number of years and I had little interest in what was going on in the ‘outside’ world. I felt that this was my lot and I would never again be a valuable member of society. I feel in my own small way I have achieved something and to the 604 genuine followers I have built up on Twitter, thank you.

Update: I have set up my own Blog site called Chatter. 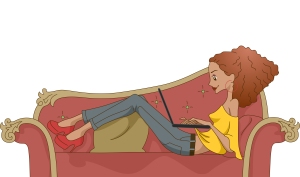 I don’t know about you but I feel Christmas comes round quicker and quicker every year. It seems like I have just taken the Christmas decorations down when it’s time to put them up again.

Then there are the presents. This Christmas was different from others. When I asked the grandchildren what they wanted for Christmas they couldn’t come up with anything. Why? Because they have everything. They have iPods, iPhone, iPads, Macs, TVs, DVDs, play stations etc., etc. etc. the Wi-Fi flying around their houses must be horrendous. So I bought some surprise presents. Now I don’t know about you but I resent the waste of Christmas wrapping paper. For a few years I used those fancy Christmas bags that cost a couple of pounds in M&S but they were past their best so I looked for an alternative. The alternative was a large black bag, into which I put the pressies unwrapped. When it came to the present giving I dived into the bag and produced a present. Instant gratification, no unwrapping. Everyone saw what the other got and there was no torn paper to gather up. That will go down a treat next year too.

Christmas cards are another bugbear. I haven’t sent any for years. Instead I put a note on Facebook wishing everyone a Happy Christmas and informing them that I’ve put the money that I would have spent on cards and stamps into buying goats. Over the years I’m sure I’ve bought a herd and I have the satisfaction of knowing that a family in Africa will benefit from those goats for years to come. As I tipped the many cards I still receive in the recycling I thought ‘what a waste of money.’

Christmas was a low-key affair. After the present giving on Christmas Eve it was just him and me for dinner on Christmas day. Craigantlet turkeys supplied a delicious Turkey. The fridge was packed. We could have survived for weeks on what was purchased for just the two of us. We wouldn’t normally eat orange and carrot jelly, but we just might so I thought we’d better have it just in case. Actually it was quite refreshing with the turkey salad. With no one to exchange niceties we both pigged out on the reclining chairs with a box of chocs and fell asleep. Bliss.

So now it’s over for another year. What for 2015? As we move into the New Year there is a campaign being mounted to save the Floral Hall. In the late sixties I attended a Manfred Mann concert. It was a freezing night as I recall but the hubby-to-be borrowed the father’s car and we drove up the Antrim Road in style. He was supposed to be playing badminton in Newry but I gave him five shillings towards the petrol and he diverted to Belfast. Mike D’Abo had taken over from lead singer Paul Jones.

The hall was beautiful and I remember the ceiling in particular but at 19 I didn’t appreciate its grandeur. I was in front of the stage and more interested in the group. Not sure whether we went outside for a ciggie or a snog but the doorman wouldn’t let us back in again. We ended up listening to the rest of the concert though an open window at the side of the building. I can now appreciate its Art Deco style and would love to see it restored to its former glory. So Belfast City Council I hope you will give it serious consideration so that a building that holds many memories for the older generation of Belfast can also be appreciated by future generations. Another observation from those days of the Floral Hall, the Astor and the Orpheus. All religions mixed together and nobody queried what religion you were. Venues like this tend to encourage integration.

We also have elections looming. A disillusioned electorate who may or may not vote will again determine our future. Camp Twaddell will probably still be there waiting for a hero. The parade season will begin again and we will continue to chase our tails and not get anywhere. But most of us will get on with the important things in life and to those who do, especially our doctors and nurses, and our police, fire and ambulance services, I hope 2015 brings you all that you want and deserve.