Imagine the scene…I’ve tried on at least five dresses of which three I knew I hadn’t a hope in hell of fitting into even with the help of heavy plant machinery. 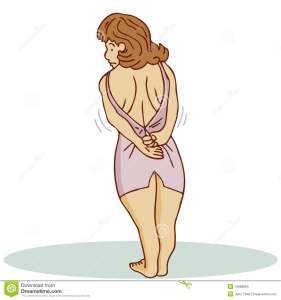 *Sigh* I exasperated as I imagined how my fully sequinned vintage number would look on me in a parallel universe whilst the voice inside my brain was exclaiming “what planet are you on you mad cat, you’re still the size you were last time you tried this dust collector on”.

Next I was hunched over like a school child forced to wear a naff coat your great auntie Josephine bought and I had a short reminder of how I looked and felt while heavily pregnant in a dress that’s only redeeming quality is the plunging neckline.

“Oh for fuck sake I suppose I better shave my legs” I moan.

“Curly or straight” I holler down the stairs to which I get a reply something along the lines of “curly, get a girlfriend”.

Can’t find a clean towel. Probably among the several bags of clean washing I have now scattered across the upper floor of our house. “This will do” as I fling it on the bathroom floor and hurriedly jump in the shower.

The fat pants are alluding me. I’m only a recent convert and somewhat still addicted to the fact that by carefully pouring every inch of my lower body into a teeny tiny pair of industrial elastic strength pants 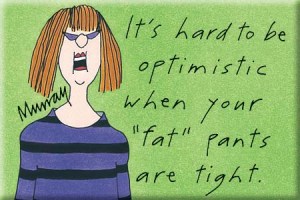 I can turn what looks like more than one roll of “baby weight” (ha…like it wasn’t hanging around before hand) in to a sleek curvature that almost looks natural – albeit bigger than I would prefer – but that’s the price of pizza *sigh*.

Anyway, the fat pant hunt is on…time is of the essence…let the angels rejoice they have been recovered.

Thanks to said fat pants I slide into a wee lacy number that more celebrates my lumps, bumps, curves and imperfections than attempts to conceal them.

“In for a penny, in for a pound” I say as I sing a wee line of “I am who I am, am who I am, needs no excuses” to make myself feel better.

For those who know me they will know I’m not overly vain but I’m not going to pretend I don’t care.

I’m not skinny, I never will be and I’m fine with that especially now I have discovered the true genius of fat pants at the grand old age of 36.

So here’s what I have to say to all the women who try to tell us that how we look doesn’t matter and what we wear doesn’t make a difference to who we are – BULLSHIT.

I like feeling good and I feel good when I delude myself into believing I look as good as I can with the help of some silly wee pants and a dollop of makeup.

I believe in a woman’s right to choose and this woman chooses the right to be a woman and to be free to feel like wearing fat pants and push up bras to make myself feel good.

I don’t wear them for anyone else but me and why shouldn’t I? Why should I be subjected to people accusing me of buying into societies prejudice against women when the reality is it’s me who’s making this choice? And I’m bloody glad I did otherwise I would have been carrying around that spare tyre unnecessarily recently !