As I entered the sixties life was changing. I was still too young to appreciate how much. I still didn’t know where babies came from even though at eleven there was another addition to the family when my brother was born. My dad took us out for a drive and by the time we got home he had arrived. This ignorance lasted until I was almost fourteen when a precocious friend who was much mature than the rest of us informed us in great detail how babies were conceived. We reacted with disbelief. There was no way my parents indulged in such gross behaviour. However that turned out not to be true when my only sister arrived when I was thirteen.

The following year my maternal grandmother passed away. I was heart broken. I

loved her and as a child spent time in her home in Camlough. She had been a widow

for twenty odd years. When she died it was my first loss of someone close to me and I was horrified by the whole funeral and burial thing. Similarly my paternal grandmother was a widow and as a result I never knew either of my grandfathers. It seemed normal in those days and I’m just so glad that my grandchildren have known all four grandparents.

I had been at grammar school for almost two years at this time. I went to Our Lady’s grammar school in Newry having passed the eleven plus. It was a bus journey to get there and meant an early start in order to catch the bus to Newry.  I became friends with an English girl from Liverpool who had come to live over here.  We are still friends 54 years later. Together we got into a lot of mischief. We were both rebellious and didn’t appreciate being told what to do. She was the first to have her ears

pierced and the first to go for a geometric Mary Quant hairstyle. Despite both of us being intelligent we were not studious so tended never to make it to the top of the class. However I excelled at debates and  any occasions where I could argue against the status quo. I also had a vivid imagination and my essays were always interesting to say the least.

In 1962 we had the Cuban crisis. Being taught by nuns the rosary beads were produced and we sat at our desks waiting for… Well I’m not sure what, but it was frightening as the world was holding its breath unsure also as to what was going to happen. Luckily Russia backed down and we all breathed a sigh of relief.

I disliked most things about school and had little respect for many of the teachers. Our history teacher smelt of alcohol, our French teacher spent her time talking about golf and most were anything but inspiring. The one exception was the English teacher who awakened my interest in literature. She spoke with passion and talked to us as if we were adults and not children.

I scraped though junior certificate with average marks and no one was surprised. In fact the principal wrote on my results ‘Eh bien ma chere’ Most of my studying was done with a copy of Jackie hidden beneath my books. Jackie having replaced Bunty and Judy as my must have magazine.
When I was fourteen, for the third time, in my life I almost said good bye to this world.  Walking with a friend at a local bathing place, called the slope, we decided to walk along a ledge during a full tide. As it was winter time I was wearing a heavy tweed coat. The tweed coat had been specially made by a Mrs Heidi who had a craft shop in the village. Halfway along the ledge I slipped and went into the water up to my neck. My friend tried to pull me from the water. However the tweed coat was now twice the weight and pulling me down. I was out of my depth, couldn’t swim and the water was freezing. All I could think of was that my mother was going to kill me for ruining the expensive coat. I grimly held on to the ledge as my friend pulled and hauled. Luckily a passer by glanced over the wall and quickly rushed to our assistance. Back on terra firma I had one of the longest walks of my life as I headed home, water dripping from everywhere. The coat had stretched so much with the water it was now around my feet. I do remember being told off but think there was much relief that things hadn’t been worse so the coat wasn’t mentioned but I think it needed altered as it was now much too long.

Busses played a huge part in my social life in the early sixties. I took a bus to and from school. That was where romance blossomed as all schools in the area used the same busses. It took at least half an hour to get to Newry and we picked up all the students in Warrenpoint on our way. Some of the busses came from Kilkeel. Childhood romances began and ended on the busses. When I was twelve my mum found a diary in which I had written ‘Terry has been my boyfriend for six months’.  I was banned from seeing Terry and poor Terry was warned off by my dad. Another young man who had a huge crush was only able to show his affection by teasing me and pulling my hair. We are still friends fifty years later.

When I was fourteen I got my first summer job working in a Warrenpoint chemist. I got paid £3 per week and I loved it. I couldn’t wait to get into work in the mornings. Ten o’clock was tea time and my job was to pick the pastries from the bakery next store. How I loved that. I worked along side a real character, Uncle Charlie, as he was known to everyone. On one occasion a customer came into the shop asking for a packet of Durex. I hadn’t a clue what that was but as was the practice I headed for the drawer marked D ( it was a simple system in those days ). Unable to find it I shouted the length of the shop. ‘ Charlie, where do we keep the Durex?’  Any chatter in the shop stopped. I watched as Charlie told the now hugely embarrassed customer that we did not stock her requirements. This was followed by an even more embarrassed Charlie explaining to me that as this was a catholic shop we did not sell Durex or for that matter did we stock the pill. I went to my precocious friend who furthered my sex education with an explanation as to what a condom was. I was beginning to wonder if this sex thing sounded worth the effort.
After 6 weeks I headed for Belfast with my best friend and blew my wages in C&A ‘s. I remember one of my purchases was a pink sponge petticoat. This was worn under a skirt to make it stick out. Made a change from the liberty bodice and the scapular.  Not sure that was a good buy. It was uncomfortable to sit on, extremely warm and impossible to wash. Twist dresses were also in fashion as were reefer jackets. But fashion was about to change and Mary Quant was influencing the change. The Beatles were influencing the pop charts. Every Sunday we recorded Pick of the

Pops on a large tape recorder that used large tapes and then played them over and over till my dad said ‘no more’ My friend had a record player and we bought our first single together. It was I think three shillings and four pence and it was Peter and Gordon’s ‘ Please lock me away’

Boys were becoming more interesting and much of our conversation was about the latest loves in our lives. Summers were spent hanging out on the roof of the baths at Warrenpoint.  Radio Caroline played in the background as we sun bathed and enjoyed the banter. No drinks, no drugs but I hate to admit it a lot of smoking. We were unaware of the danger back in the sixties and we felt very sophisticated as we puffed on our Gold Leaf.

We had our own local pop group in Warrenpoint in the sixties. The T- Set who managed to play as a warm up to Dave Dee, Dozy. Beaky, Mick and Tich when they played in Banbridge. 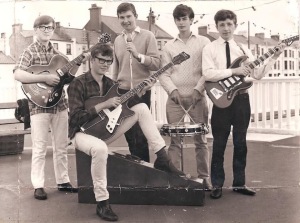